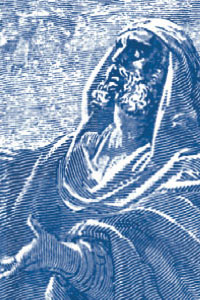 As a toddler, Samuel entered the service of God with Eli the priest at Shiloh, home of the Ark of the Covenant, about twenty miles northeast of Jerusalem.

Claim to Fame:
Was the first of the major prophets who preached inside the Land of Israel and the last of the Israelite judges.

Kings He Anointed:
Anointed, or performed the ritual that empowered, Saul and David as the first Israelite kings.

Greatest Disappointment:
Couldn’t persuade the Israelites to rely on God rather than on a human king.

Favorite Quotation:
“Above all you must honor and serve Adonai faithfully with all your heart; and consider how generously God has dealt with you. For if you continue in your wrongdoing, both you and your king will be swept away” (1 Samuel 12: 24 – 25).

Major Contribution:
Established a rule of kings, a monarchy, based on loyalty to God’s teachings.