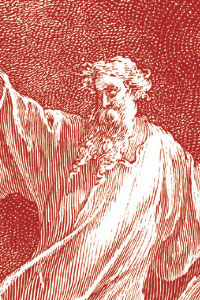 Famous Guest Appearance: Elijah appears as a vagrant in Herman Melville’s 1851 novel Moby-Dick. He reprimands the characters Ishmael and Queequeg for sailing with Ahab, the tyrannical and cruel captain of the whaling ship Pequod.

Zealous Critic of the King

Biblical Buzz:
The prophet Malachi says that Elijah will reappear on earth as a sign of the coming of the Messiah, and he will make peace between “parents and their children and between children and their parents…” (Malachi 3:23 – 24).

Favorite Quotation:
In response to Ahab’s bullying, the prophet said: “I did not bring trouble on Israel; it was caused by your abandonment of Adonai’s mitzvot and your pursuit of foreign gods.”(I Kings 18:18).